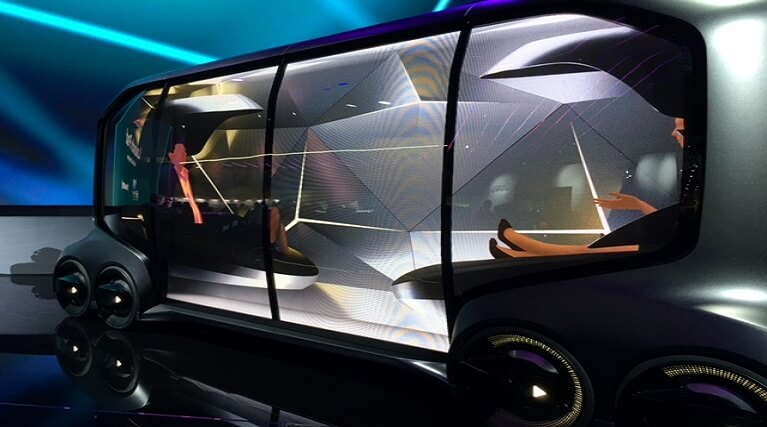 Although the inclimate weather delayed tens of thousands of CES goers at various airports across the midwest and east coast, the international automotive collective is pushing forward at full speed to deliver us into a world of autonomous vehicles and “connected, smart cities”.

In fact, the term “automotive” is effectively being replaced with the term “mobility”. The automotive industry is now transitioning into the mobility industry and change on a grand scale is afoot if you take what you see at the CES show at face value. The combustion engine is an endangered species as visionary engineers are burning the midnight oil trying to extend the range of EVs, perfect electric drive trains, while festooning the roadways with charging and hydrogen fill up stations.

Companies are challenged to reinvent themselves so they don’t become irrelevant in perhaps the fastest moving “mobility revolution” we’ve seen since the car was introduced.

The race is on to see who can create the most effective and cost efficient radar and lidar systems, autonomously driven vehicles, and integrations of “human with car” reminiscent of the Borg in Star Trek. Everyone is redefining themselves in this new market. Companies that worked in avionics specializing in integrating and securing complex operational systems in fighter and commercial jets are now competing to offer OEMs the same service as embedding technology becomes more complicated during this transitional period.

Even Continental Tires is bouncing out of its 150 year history of selling tires by entering into the autonomous vehicle race. Ford is waxing excitedly about fully connected “smart cities”, and Toyota is in full future mode with e-palette which has fleets of electric “minibuses” cruising around town delivering cuisine, consumer goods, and necessary services. Both Ford and Toyota base their visions of the future on a yet to be built utopia where city councils, bureaucracies, tax sucking politicians, and criminal syndicates, and labor unions don’t exist. I suggest they try setting up at Universal Studios City Walk or Disneyland, two of the more popular locations where fantasy is competently put on display.

Truth be told, CES is a true automotive spectacle. Giant audio suppliers, mod gods, wheel manufacturers, entertainment integration, and concept designs are all there in spades. There is something fascinating in the “mobility” industry in virtually every mobility-related booth at CES it just depends on how deep you want to dig, and then correlate the information. Still, the prevailing buzz is that the future is going to be gasoline free.

Ultimately, if all of this technology can be affordably integrated en masse into the new cars of the future, the entire automotive landscape as we know it will change. Car accidents will be rare and far less fatal, automotive exhaust pollutants will be replaced by 99.9% pure water, streets will be far quieter, there will be little need for expensive auto insurance, body shops and lube joints will go the way of the blacksmith, and stealing cars will be near impossible. I like that future.