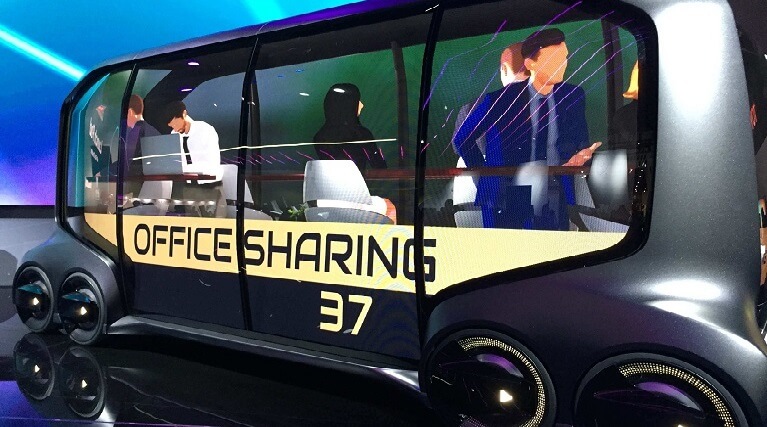 On day one of the 2018 CES Show, an enthusiastic crowd of 400+ media gathered at Mandalay Bay to hear Akio Toyoda’s vision of the future. Akio is the grandson of Toyota founder Kiichiro Toyoda, son of Sakichi, and is the 3rd generation of visionary Toyoda’s who have systematically lifted Toyota to the top of the automotive world. Toyota was originally in the business of making agricultural equipment (looms) before they sensed an opportunity to gain some ground in the fledgling Japanese automotive industry. The company spelling was changed due to superstitious belief based on the number 8, which is how many strokes it takes to write the name Toyota – 8 is luckier.

Akio’s vision of the future is a vehicle concept that that he brands “e-Palette”, is bolstered by his historical recount that Toyota didn’t start out in the automotive industry, hence, is an adaptive company, and that “mobility” would be a better single word definition used to describe Toyota as it moves into the future. His goal is to have 5.5 million EVS on the road by 2030 and 1 million hydrogen fueled vehicles by the same date.

Toyoda wants to be fully electric by 2025 and is working on new, less expensive solid state battery technology to outperform the current lithium-ion battery they have in production. Akio Toyoda has a big vision of the future and the muscle to push it.

Developing relationships with other industry leaders to shape the future, Toyoda hopes to materialize his vision of a clean, new, automated world. He has already teamed with Servco Pacific to test a new car sharing app, as well as Amazon, Pizza Hut, and Microsoft to create his e-Palette vision which is a fleet of autonomous delivery vehicles to serve consumers in a number of ways from delivering food, to providing mobile offices, and transporting the handicapped.

The Toyota e-Palette is a primary component of a comprehensive vision of a future “smart city” whereby autonomous vehicles scurry about delivering goods & services, and providing transportation for all who need it. All the vehicles will be fully loaded with radar and LIDAR and connected to not only the customers mobile devices, but the city infrastructure as well. It’s a vision where all technology is clean, everything runs on-time, and folks have more time to be productive or simply relax if that’s what they choose.

Toyota as a company is already well on its way designing it’s e-Palette fleet. The completion of a fleet of concept vehicles is probably the easiest part of the plan to initiate. Obstacles and potholes along the road to success will include dealing with city planners, state transportation officials, insurers, lawyers, state and city officials looking for ways to extract tax dollars, construction of necessary infrastructure, labor unions, criminal syndicates, and issues that include repair and maintenance of technologies that are completely new.

Ford’s Smart Mobility LLC also includes fleets of autonomous vehicles, electric vehicles/bikes, fully wired “smart cities” and zero emission transportation. The issues to get from dream to material are the same in Ford’s vision as they are in Toyota’s. The question is where to fully execute a POC on a large scale? Singapore comes to mind as the perfect location whereby something this visionary would be readily accepted and easily tested. The population is young, forward thinking, well educated, and relatively crime-free.

New York City has created a smart city advisory council with technology leaders from Google, Microsoft, IBM and others to “advance NYCx’s mission to test new technologies, “from drones to blockchain,” (according to the city) in different zones of the city and develop smart city tools. Meanwhile, if we can get past the bureaucracy and hands in coffers issues as is entirely unlikely, we may just see some movement forward. It’s always us dang humans that get in the way of progress.