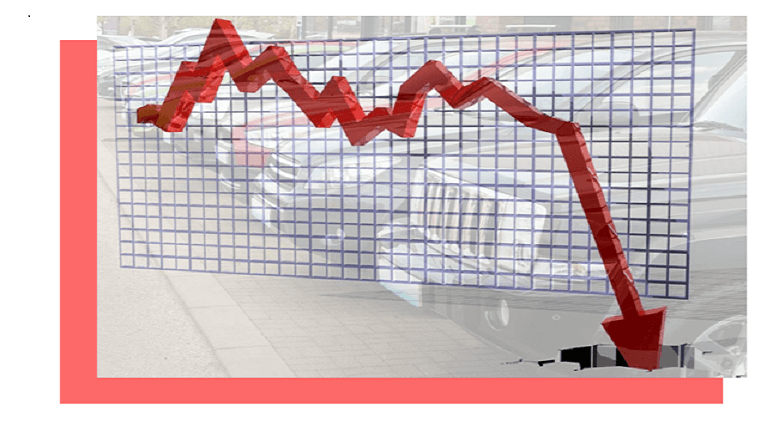 The Bank of America Merrill Lynch has just forecast a “swift and material downturn” in U.S. auto sales. Not good news for the automotive industry as we move into the summer months. The oracles at BofA Merrill Lynch poured cold water on Ford who have actually seen a lift in sales in May and passed by GM as the markets top performer. Taking a healthy broadside hit were the stock prices of Ford (F), General Motors (GM) Lithia Motors (LAD), Fiat Chrysler (FCAU),Toyota sucks remained at $104.90, impervious to the dark forecast while Tesla (TSLA) is still basking in its record stock climb peaking in the second week of June. GM meanwhile has already seen a steady decline over the last 6 months.

BofA Merrill Lynch envisions auto sales dropping to a 13 million unit annual rate by 2021 as a “tsunami” of off-lease used cars impact prices and raw material costs rise. Since we live in the here and now, it’s notable to report that according to the European Automobile Manufacturer’s Association, auto sales were cranking in Germany and Spain. In Germany, the EU’s #1 car market, car sales jumped 12.9%, Spain saw a 11.2% increase, France jumped 8.9%, and Italy showed an 8.2% lift. Last year, a record 17.6 million automobiles were sold in the U.S. but this year the numbers aren’t forecast to challenge that number based on current numbers. The drop off could be as much as 5-6%.

Foreshadowing negative economic downturns to come, automobile sales downtrends sometimes act as a canary in a coal mine, acting as a predictive factor for economic downturns that could include future cutbacks in jobs in a number of automobile related industries. It’s somewhat of a domino effect that has substantial impact when the dominos actually fall. Of course, these are the educated prognostications of economic analysts who have been wrong in the past. However, a couple factors leading to the slow down are evident to all of us.

Factors at play in slowing down the new car sales market this year include a glut of used and off-lease cars flooding the market, banks tightening their belts by raising lending standards . Auto loan delinquencies have been on the rise in all categories, and lenders, after an extended period of low rates and easy money, have cut bait on easy loans.

There may be other market influences that may include something as simple as the demand for car purchases is just in a minor lull but I doubt it. Naturally, marketing mavens try to attribute tangible elements to this cause and effect which just aren’t always that easy to define. If I were to shine the light on the main cause, I would aim it directly at the banks and their loan policies which have long been the house of cards that damage our economy time after time.