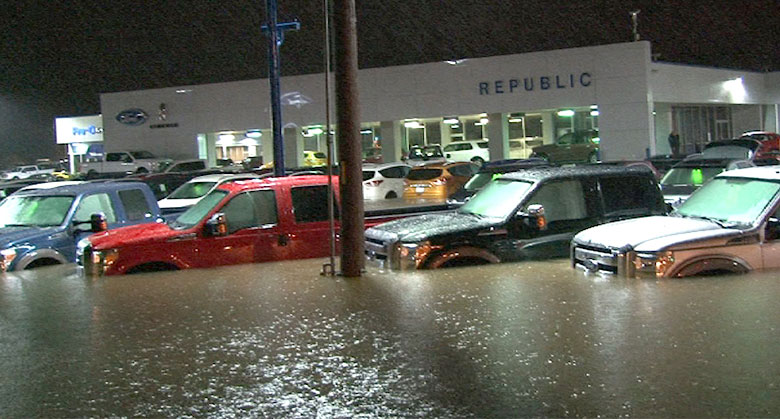 I’m by no means a Wall Street Wiz. The stock market is booming right now, but it’s never been a viable option for me because I’ve never had any real interest in it. With that said, I did notice something that may actually be somewhat of a hedge against riskier investments no one has ever thought of…or maybe not. I’m not saying it’s a “sure” thing, but it may be a “thing” worth thinking about.

Since I just wrote a blog on the ironic profitability of car dealers located in areas that are struck by floods and natural disasters, I figured I’d do some deeper diving to see how such increases in post-deluge sales affects share prices a quarter after the claims are paid out, and flooded cars have been replaced by new vehicles (since used inventory is depleted by flood damage as well).

What I found was that over the last 365 days, Ford and Chrysler shares were selling at their highest in January and February of this year, a few months after Hurricanes Irma and Harvey. Fiat Chrysler increased over $8 a share while Ford, a notoriously cheap company to invest in, sold for more almost $4 more than it does now. Honda also sold for more than $6 per share in the same time frame.

Toyota, currently trading at or near $119 today, traded at $140 in January earlier this year. If you had thrown $1,000 at Toyota before or during hurricane season, you would have banked 20K. Now, there may be absolutely no correlation between a destructive hurricane season and banking on auto stocks, but the data is at least really, really, compelling.

GM, which had been doing fairly well in October of 2017 stayed hot through January after dipping a tad in late December. The takeaway here is that GM stock prices stayed stable in that Q1 post disaster period. As of this minute, share prices for GM are down $11 from that January peak. If any of us had put a K down on GM while the winds were blowing and the waters were raging this time last year, we’d have pocketed a 6X ROI 4 months later! As it stands now, if you held onto that stock until today, you’d be down $400!

With that said, there appears to be a very nasty hurricane off the east coast named Florence trying to float her way into the history books. Will Flo live up to the hype spotlight-starved meteorologists and failing cable networks have been building up (thankfully, they usually don’t)? Who knows. Will tidal surges and flood waters wreak enough havoc to sink enough vehicles whose owners have comprehensive insurance/flood coverage to make a difference in automotive stock prices in January and February? I for one think it may be worth a c-note or so. Certainly beats the odds of my beloved Browns winning the Super Bowl.

Know WHEN to ask for the sale.

Video is the Way of the World!