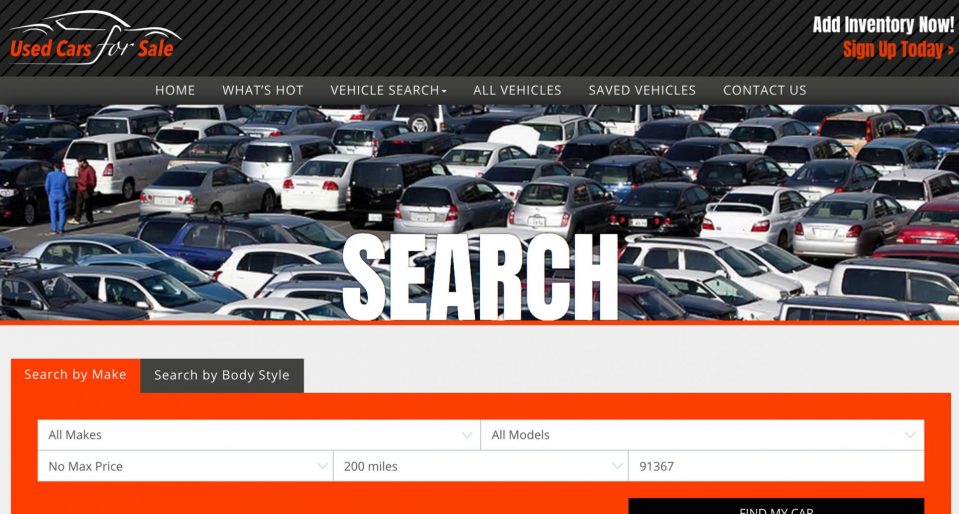 The domain usedcarsforsale.com, just recently sold for $340,000.00. It was the largest purchase of a domain name in the automotive industry since carsales.com in 2008 and autos.com in 1999. This adds to an extensive list of domains (5,000) owned by Steve Tackett that are predicated on behaviorally targeted “Exact Match” Google search phrases, and make up an extensive network of Google search-based, classified listing sites. The value of such a domain is largely measured by the traffic a site generates based on keyword search inquiries.

Said Tackett, ”Car dealers now have a classified site that they can list unlimited inventory at no charge whatsoever, all leads will be free as well. I like the trade-off, dealers get great leads, traffic, and sales for free, we get to see which emerging technologies are the most effective at driving car shoppers to their sites, it’s a win-win”.

The “Free” initiative does face some dealer pushback, and although they’re signing up 100 lots per week, it seems that the more weary dealers who believe that there is no such thing as “free”, are less inclined to participate. However, the payback for Tackett is that he gets to test emerging technology which he values much more as part of a bigger picture than nickel and diming dealers with listing and lead fees.

An example of such technology is a live streaming system by DropIn Auto. Streaming live video (think Facetime) can prevent bait and switch tactics by making the dealer prove that they actually have the vehicles on the lot. It also allows the consumer to save an enormous amount of travel and possibly unwanted face-time with a car salesmen. You can literally do all of your shopping on your cell phone and take a full tour of the targeted dealer’s lot as if you were there. In fact, there are several platforms now in play that start and finish a vehicle purchase online with the consumer never having to face off with a used car salesman until a test drive is scheduled.

There’s also advanced “geo-fencing” technology that tracks buyers in a relatively small area, perhaps limited to a city block, that can “see” where the shopper is in real-time, records where they’ve been, and can reach out with texts and banner ads enticing them with calls to action to perhaps visit another dealership with the technology to do so.

Marketers can insinuate themselves into a shoppers journey in more ways than ever before.Tracking technologies currently exist that allow a car dealer to see exactly what was sold by their competitors in near real-time and how frequently that shopper had a touchpoint with their own staff or had actually visited their lot! It’s a great way to keep score and figure out what may be working or lacking in your overall treatment of the potential buyers who reach out to your dealership but end up buying from someone else.

According to the many used car dealers we’ve spoken to, Craigslist tends to outperform all of the other “paid” classified listing sites, but has had the same basic “free” business model for many years. The main issue car dealers face with Craigslist is that as more vehicles are added by other sources, their vehicles get pushed back page by page. To combat that “piling on” effect, there is now a moderately priced 3rd party software that re-lists each vehicle periodically to keep it at the front of the stack.

It’s a constant battle to stay visible and provide the consumer with a great shopping experience. In the competitive automotive industry, keeping up with the Jones’s is a must. Inevitably, he with the best technology will win, not the most expensive lead stream.

In harnessing “best in class” technology, and offering it as an upsell to tens of thousands of dealer clients on his site, Tackett believes that he can be very successful affording dealers enhanced visibility and leads for free forever, but offer a technological advantage at a fair price. With innovations in marketing coming out monthly and his own platform to test it on, this might prove to be a very novel strategy.

Top Selling Cars of 2017 Through November

Video is the Way of the World!