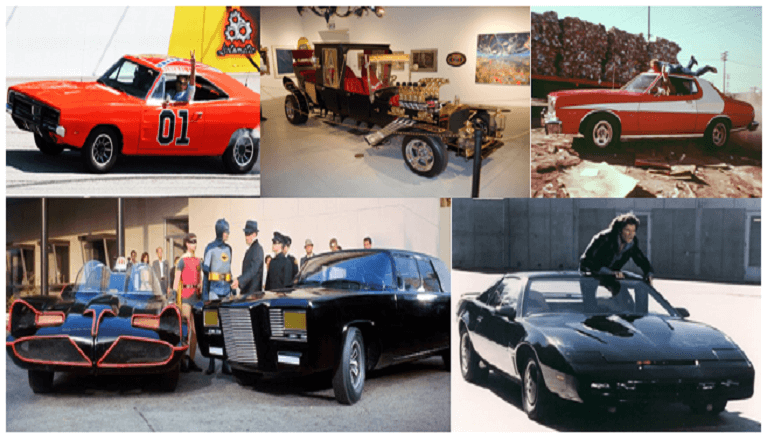 Throughout the years, TV has given us some of the coolest cars imaginable. The question is; which TV cars were your favorites? If you had to pick one car to own, which one would it be? I have excluded Don Johnson’s Ferrari because although it looked cool, it didn’t have that memorable quality these others have. The list has been narrowed down to my Top 6. I would have had a Top 5 but when I realized the Black Beauty was driven by Bruce Lee, the cool factor went through the roof. There hasn’t been a cool car on TV in decades. Which is your fave from the era of cool TV cars?

As crazy looking as the show itself was, this mod was as “mod” as it gets! It was made from three Ford Model T bodies and is 18 feet long. The 133-inch frame was made by hand, as were the brass radiator and fenders. It has blood red interior and black pearl paint. It took 500 hours to hand form the ornate rolled steel scrollwork. The front end had a dropped axle, split radius rods and T springs. Its design featured a custom hearse body.The Munster Koach appeared in over twenty episodes throughout the series’ two-year run, and was also seen in Munster, Go Home! using different wheels. Tom Daniel’s original drawing of the Munster Koach had it supercharged with a hood scoop and thin, round disc lights. George Barris chose the ten-carburetor setup with the ten air horns and lantern lights.

The cool crime fighters ride was as badass as it gets for the time period. It was based on the 1955 Lincoln Futura concept car created by Ford in Turin, Italy as a “one-off” for 2 million dollars. The engine was a 390c.i., V8 with jet engine looking exhaust pipes! The tires were 15” Firestone wide ovals, Mickey Thompson and US Royal Laredo. Awesome you say? I agree. Granted, the batmobile undertook a number of modifications that would make this original look like a roller skate but hey, this one was driven by Adam West, those were driven by Batman impersonators.

Truth be told, I never watched the show but did date one of the principals estranged wives. Now that my confession is out there, the car is more famous than the actors in the series. The General Lee is a 1969 Dodge Charger driven in the television series The Dukes of Hazzard by the Duke boys, Bo and Luke, along with cousins Coy and Vance (in season 5). It is known for its signature horn, its police chases, stunts—especially its long jumps—and for having its doors welded shut, leaving the Dukes to climb in and out through the windows. No car could have survived the abuse that car took over a 5-year run unless of course, this was one of Hollywood’s most famous cars.

This was probably my favorite TV car of all-time. Granted, it was a FORD in the days when Ford made pretty junky products, with over-sized bumpers, bad handling, and metal that was as impervious to winter conditions and road salts as a garden snail. Still, this was Starsky and Hutch’s Gran Torino and it was damn cool! The engine was a 351c.i. V8 rated at 250 hp. Although it looked like a muscle car, it was really nothing special from a spec and performance standpoint.

he original Kitt was a 1982 Pontiac Firebird and driven by the shows star David Hasselhoff playing “Michael Long”. According to Popular Mechanics, the Trans Am used for the original “Knight Rider” series was a front engine, rear-wheel drive two-door coupe. In the show’s universe, the car cost an estimated $11,400,000 to make, and the imaginary specs the car had in 1982 clearly show that. The engine in K.I.T.T was a special “Knight Industries turbojet with modified afterburners,” and the transmission was an “eight speed microprocessor turbodrive with autopilot” (which allowed the car drive without any passengers). K.I.T.T. could accelerate from 0 to 60 mph in an astounding 0.2 seconds with power boosters, while braking from 70 to 0 mph only took 14 feet.

The Black Beauty (The Green Hornet)

First of all, the car was driven by Bruce Lee who played Kato. Enough said. The vehicle was based on a Chrysler Imperial with a 440-cubic-inch V8 turning out 350 horsepower and 480 pound-feet of torque running through a three-speed automatic. According to Autoblog, “There were 13,752 such sedans made by Chrysler, and this one got to live a more fruitful life than any other. Believe it or not, just four purely cosmetic changes were made to the exterior of the car: the greenhouse sail panel was extended 14 inches to make the sedan look more like a limo, the door handles were replaced with electric switches, the rear lights were redesigned to run up the trunk, and the gas tank filler flap was moved to a spot on the back deck ahead of the trunk, since the original spot in the center of the rear valance was taken by a gun.”

Automotive Gift Ideas for the Holiday Season For Under $100!